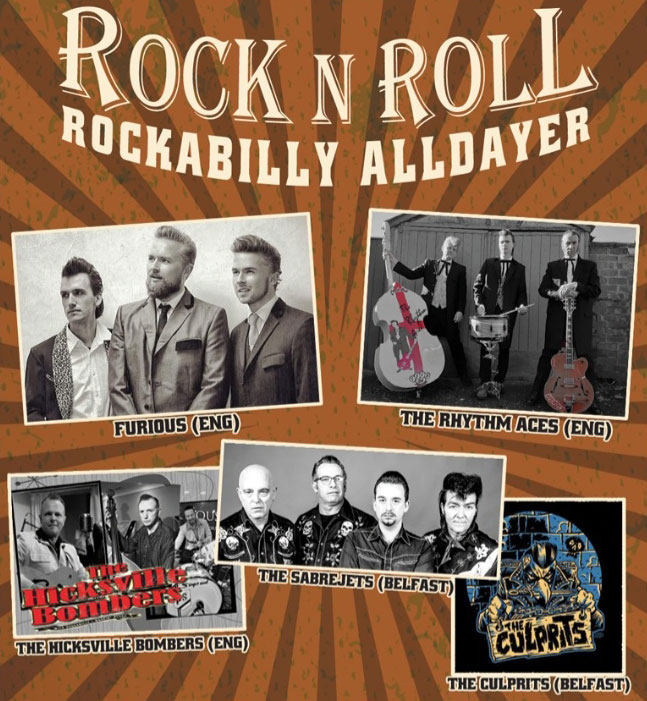 Buy Tickets
It’s a pleasure welcoming another great line up, off the top Rock ‘n’ Roll/Rockabilly artists to The Empire for another great Rockin Alldayer in Belfast.
Ruthless, gritty and hellbent Rock ‘n’ Roll from the streets of Liverpool! With a relentless touring schedule, FURIOUS have been cemented as one of the hardest working & wildest live acts around. Their appeal crosses so many borders and with their self penned songs about teenage life today, they are turning the world’s kids onto a wild Rock ‘n’ Roll beat.
“Furious have got something special! With that big old double bass and twanging guitar, they really blew me away” – James Burton, Guitar Legend
“Furious are the toughest, possibly the youngest, and definitely the most no-holds-barred rockers on the block. No other band compares! These guys live and breathe the music and believe every word of every song they sing. They deserve our undying respect as they are the real deal!” – Now Dig This Magazine
Joining Furious on the line-up from England will be The Hicksville Bombers and Hard Rockin Trio The Rhythm Aces.
From the local scene the lineup is completed with Belfast’s greaser kings The Sabrejets and some authentic neo-rockabilly from The Culprits.
DJs Alan Gibson (Belfast) ,Sean Gilbert (Eng) and Eamonn Doyle ( Enniscorthy) will fill in between the bands.