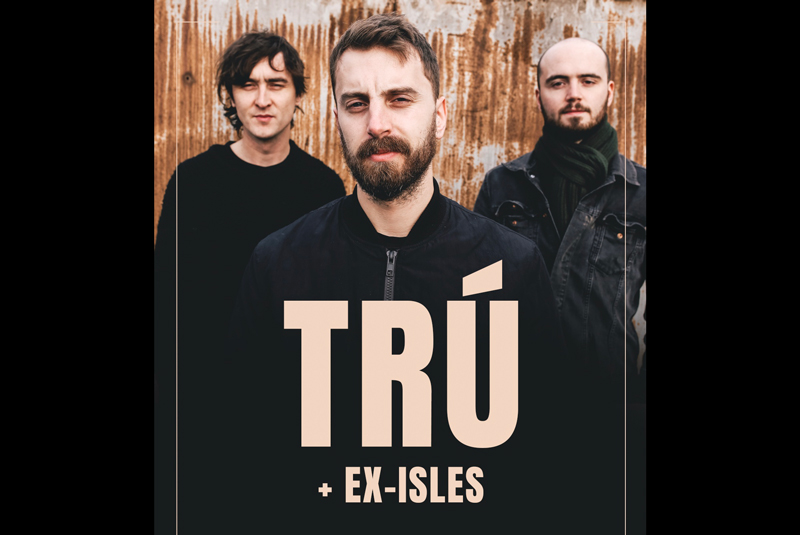 Buy Tickets
The trú was a mythological trio of poet-musicians in ancient Ulster. They were revered throughout Ireland, some believing their songs and stories came to them from the future. Others maintained that the trú were possessed by spirits during performance. As such, they were considered gatekeepers to the Otherworld.
It’s here where Northern Irish trio ‘TRÚ’ draw their inspiration. Dónal Kearney, Zach Trouton and Michael Mormecha are unique as artists in their own right. Growing up learning songs from the sean nós tradition (singing in Irish), Dónal is a songwriter in the folk tradition and has recorded as a soloist on video game soundtracks including Xenoblade 2 (Nintendo) and World of Warcraft. Multi-instrumentalist Michael is also an in-demand producer and will release his second solo album ‘See Sea’ following a successful Kickstarter campaign. Zach brought the trio together. His contemporary approach to arrangement showcases an eclectic musical palate (everything from rock to choral harmony) and a passion for folklore. Their collective chemistry has been enchanting audiences with powerful storytelling and songcraft since.
From Gaelic Waulking songs and Scots lullabies to vengeful Japanese spirits and other mysterious characters, debut album ‘No Fixed Abode’ (May 2021) draws inspiration from centuries of folklore in Ireland, Britain and beyond. These are stories told with a contemporary voice. There is nothing traditional about TRÚ except the songs themselves.
“No Fixed Abode” was nominated for Best Album at the Northern Ireland Music Prize 2021 and polled in Mojo Magazine’s Top 10 folk albums of 2021
“a distinctive, atmospheric debut” – The Guardian
“remarkable” – Folk Radio UK
**** Songlines
“Absolutely amazing!” Moya Brennan, Clannad
“Stunning vocals” Ruth Smith, RTÉ
”Amazing” Lynette Fay, BBC