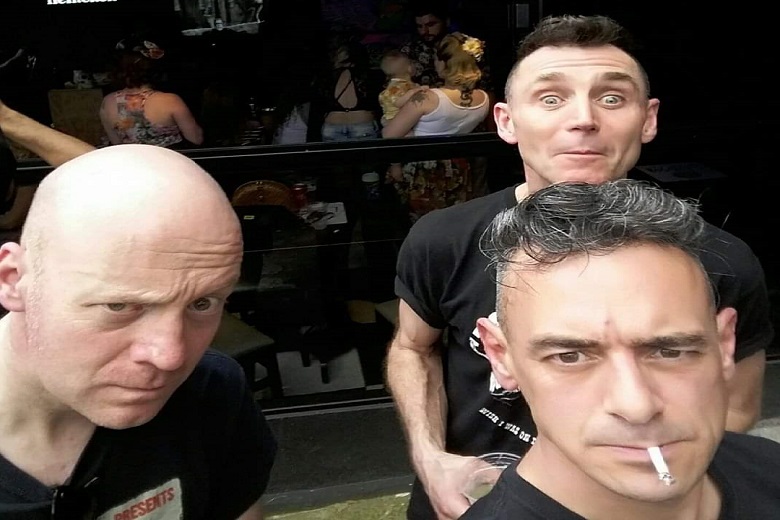 The first offerings from Brighton’s rockinest trio can be traced back to 1985 where three alarmingly fresh faced rockabillies recorded a few tracks with Boz Boorer of Polecats and later Morrissey fame at Northwood studios.

Roy Williams of Nervous Records remembers well when our heroes were trying to get signed, in typical fuzzy rockabilly folklore style the details are just that, fuzzy, but he does recall a piss-up of monumental proportions at a gig downstairs at the Clarendon organised by a woman unknown who promised free booze for interested parties and some presents for selected people. A phone call to Ray Frensham of Northwood records later and the deadly duo were off ‘to have a laugh and milk the free booze for all they were worth’. Mission accomplished Roy does not remember getting home. He does remember with glee correcting the spelling on schoolteacher Mark Ds letter to him, the wise old sage!

Not long after and all things were rockin’ along quite nicely in the Texans camp with their growing legion of fans treated to the release of Sodbusters, a cracker of an album, hard to pigeon hole not psychobilly with not a hint of a graveyard, Zombie or Vampire not rockabilly, but a slap bass driven party album with what would become their trademark mix of all sorts of styles. A few other tracks appeared on Raucous and Nervous compilations to keep the Rockin’ underground hungry for more.

Hard touring with the fan base building and the Album selling soon followed hot on the heels by new releases Los Me Boleros which included all time Texans favourite ‘Indians’ and live blaster Five Beans In the Wheel. Saturnalia was released on Picture disc to wide acclaim and included classic Texans tunes Bloody, Cairo and No Tomorrow. One of the Texans great talents was to cover songs and make them totally their own, the other was to sing songs with pretty miserable lyrics and make them sound happy and make you jump about

Such was their live reputation the Long Tall ones soon found themselves on the end of the Jettisounds lenses where their show at the Night Of The Long Knives was captured in all it’s beer swilled glory and titled ‘Blood Sweat and Beers’ for all that couldn’t make it or weren’t born yet could see what they missed.

In the meantime the Texans had been embraced by the Psychobilly masses of Europe regularly trundling off with their van car or any other mode of transport they could get their hands on to play gigs the length and breadth of the continent to a fanatical following.