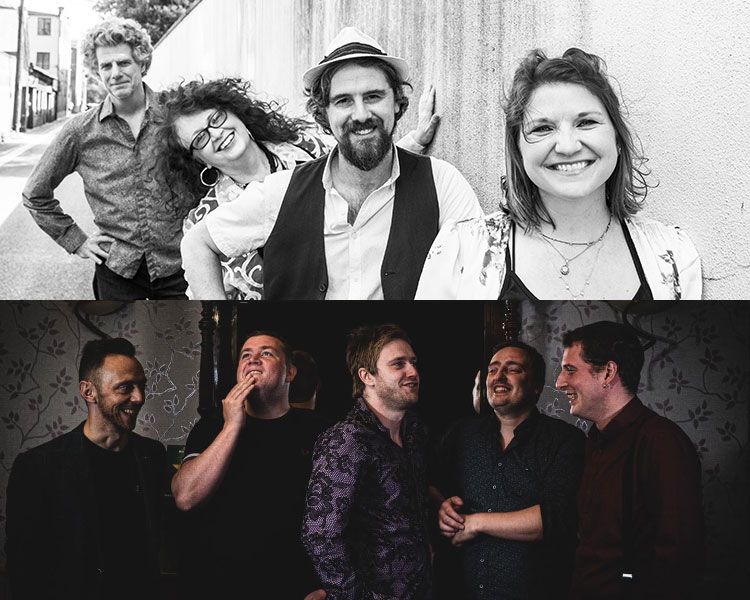 Caolaidhe Davis, who hails from Holywood, Northern Ireland, emigrated to the United States in 2005 to pursue a career in music. He found himself in need of a fiddle player, and as fate would have it, classical violinist/music teacher Meghan was working at an Irish pub in DC where the two met. He quickly auditioned her for the band, but what Caolaidhe didn’t know was that he was auditioning his future wife and partner-in-crime. Fast-forward a few months down the road, and the pair found themselves living on ’19th Street’ in Arlington, Virginia, writing songs and creating the sound that would become the backbone of The 19th Street Band. With the addition of the extremely talented rhythm section, Greg Hardin (bass) & Patty Dougherty (drums), this band ignites an audience with their magnetic presence and joy-filled chemistry that no crowd can resist. Characterized by high energy and strong vocal harmonies, The 19th Street Band brings together a constellation of Americana, country, and rock with a taste of punk.  Bridging the musical traditions of bluegrass and roots from Ireland to the Appalachian, their eclectic gypsy-rock spirit literally leaps from the stage and leaves every crowd wanting more.

The band’s newest album, Diamond in the Rough, has received air play all over the UK, including BBC Radio. It was chosen as ‘Album of the Month’ on West Norfolk Radio and has been featured on radio programs in Ireland, Canada, Europe and the US.  The band does an annual tour of Northern Ireland/Ireland and are excited for their debut at The Empire in Belfast.

Diamond in the Rough was self-released in 2020 and includes three songs that were co-written by the Clontarf Cowboy, Philip Donnelly, and John Prine. Donnelly invited the band to record these songs with him at a studio in Tipperary where he produced the tracks and performed as a guest musician on the album.

From inauspicious beginnings playing a supposedly one-off show as a favour for their local bar, The Logues are now one of the most sought-after live acts in their native Ireland and beyond, due to their inimitable ‘psycho ceilidh’, ‘whiskey-soaked folk’ style and raucous performances.

The five-piece band come from the tiny border of town of Castlederg in County Tyrone. After a few years playing jam sessions in dens of ill repute, the band decided to seek pastures new, armed with the irreverent songwriting chops of tin whistle/bassist Logan McCool. The self-recorded and released Tough at the Bottom (2011) reflected this. Comin’ of Age (2016) shared much of the former’s frenetic, folk punk elements but also marked a progression in sound to elements of singer-songwriter and Americana.

These LPs and the live shows soon gained the attention of promoters in Europe and the U.S; the band now appear regularly on the European circuit and will perform at North Texas Irish Fest and Iowa Irish Fest this year as part of European and North American dates in support of Better Man, the single released in March, 13 2020 with an EP to follow in the summer.