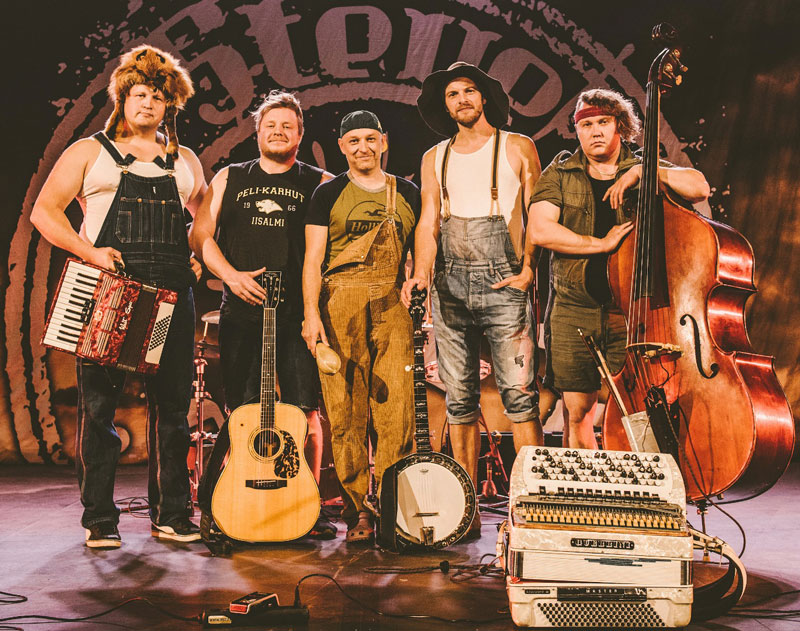 A Finland-based roots music collective with a penchant for turning hard rock, metal, and grunge classics into front-porch jamborees, Steve ‘n’ Seagulls found an international following via a series of YouTube videos beginning in 2014. They made their debuts in the Top Ten of Finland’s album chart and the U.S. bluegrass chart with their first album, 2015’s Farm Machine.

Formed in 2012 in Jyväskylä, Steve ‘n’ Seagulls began honing their signature hillbilly metal sound at theme events, cruises, clubs, and restaurants. By 2014, the quintet (banjo, spoons, upright bass, accordion, and guitar) had inked a deal with Spinefarm Records on the strength of their increasingly popular YouTube videos, which saw the band laying down meticulously rendered bluegrass versions of songs like “The Trooper” (Iron Maiden), “Holy Diver” (Dio), and “Thunderstruck” (AC/DC). The following year saw the release of the group’s debut studio album, Farm Machine, which featured covers that ranged from Metallica’s “Nothing Else Matters” to Guns N’ Roses’ “Paradise City.” It climbed all the way to number seven on Finland’s album chart, and found the side charts in the U.S., reaching number 20 on Billboard’s Heatseekers chart and number three on the bluegrass chart.

Brothers in Farms
A year later, offering versions of Nirvana’s “In Bloom” and Megadeth’s “Symphony of Destruction,” among others, 2015’s Brothers in Farms reached number ten in Finland and topped the bluegrass chart in the U.S. Steve ‘n’ Seagulls returned in 2018 with Grainsville, which included takes on such iconic tracks as Beastie Boys’ “Sabotage” and ZZ Top’s “Gimme All Your Lovin’.”