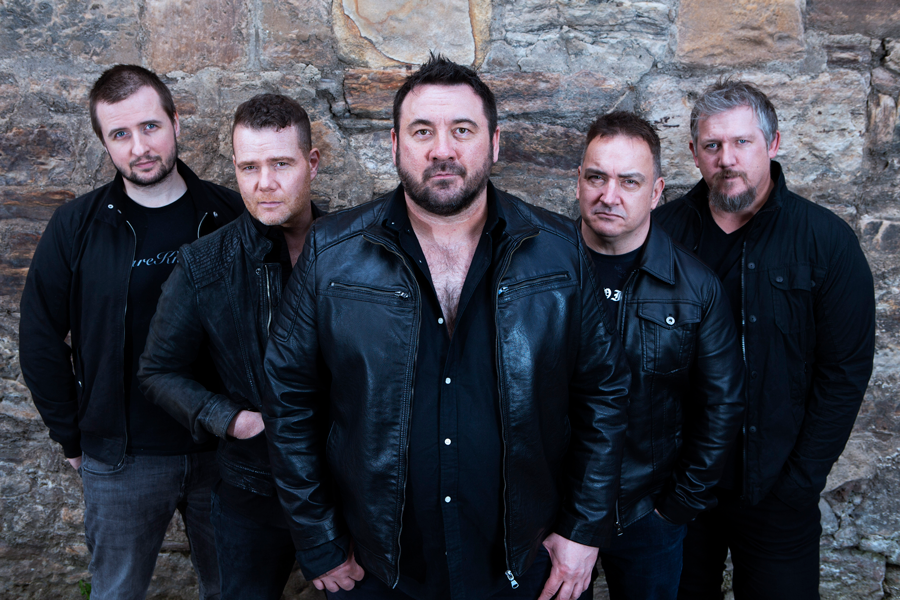 Right now, King King are a band breaking into a swagger. There’s no denying the momentum of the Glasgow rockers saluted as “the best blues-rock band in the world” (Blues Rock Review). But for Alan Nimmo (vocals/guitar), Zander Greenshields (bass), Stevie Nimmo (guitar), Andrew Scott (drums) and Jonny Dyke (organ/piano), it’s far from mission accomplished. “We’re not stopping to smell the roses,” says Alan. “We want to take this band as far as we can.”

If the year ahead had not been so busy, King King might allow themselves a moment to reflect on the triumphs of 2017. In another year of quantum leaps, perhaps the main event was Exile & Grace. Produced by Wayne Proctor and Alan Nimmo, Mixed by Chris Sheldon (Foo Fighters, Feeder, Therapy?), this fourth album was released October 13th, unveiling a track listing that bristled with sharply observed lyrics and blues-rock firepower. “There’s an underlying theme on the new album,” explains Alan. “Some of the main songs are about the state of the world, y’know, this beautiful blue planet that’s turning into a battlefield. There’s an edgier, rockier feel this time around, but you’ve got the soulful ballads as well. It’s still King King. It’s just what we’re doing now.”

For a band with press plaudits to burn, it was no surprise to see Exile & Grace saluted by the rock media and crowned as Classic Rock’s Blues Album of the Year. Likewise, it was business as usual as the album stormed to the top of the iTunes and Amazon Blues charts. But this time around, there was no mistaking the sense of a band making its commercial breakthrough, as Exile & Grace hijacked the official UK album charts (at #31), putting King King amongst the A-list and firmly onto the mainstream radar.

Not only the jewel in their studio catalogue, Exile & Grace is also giving King King’s setlists a shot in the arm, as the band roll out on a white-knuckle 2018 tour schedule that would make lesser road warriors quake. With the addition of respected keys man Jonny Dyke (ex-James Morrison/Elkie Brooks), they’re wasting no time, hitting the New Year running with a five-date UK tour that kicks off at London’s Shepherd’s Bush Empire, then rolling on to major cities across Europe (“We just need to believe in that old adage from Wayne’s World – if you build it, they will come,” says Alan of the auspicious venues in the diary. “We’ve got the ambition and drive to make it work”). Following a summer of festival action, September will see the boys support the mighty Europe on the Walk The Earth tour, warming up the crowds everywhere from Glasgow Barrowlands to the Royal Albert Hall.

It is the itinerary that working rock bands dream of. But then, there’s been no shortage of pinch-yourself moments for King King, ever since the band’s touchdown at the 2010 Monaghan Blues Festival and the following year’s British Blues Award-winning debut album, Take My Hand (declared “tremendous” by Maverick). In 2013, Standing In The Shadows underlined the collective’s sharpening songcraft, while 2015’s Reaching For The Light Infiltrated Classic Rock’s Best Album poll – and secured a nomination for ‘Best New Band’ at the magazine’s coveted Roll Of Honour. By May 2016, they were even ready to deliver their long-demanded live album, with King King Live placing above The Rolling Stones in the Amazon Blues Chart. “With each album, each year and every time we write songs,” says Alan, “we’re always striving to get better.”

No backslaps. No laps of honour. No smelling the roses. Propelled by the acclaim of Exile & Grace and their extraordinary chemistry, King King are ready to swagger into 2020, and raise the stakes as their story unfolds.

“This is the next chapter in King King’s journey,” says Alan, “and we want to take this band as far as we can…”