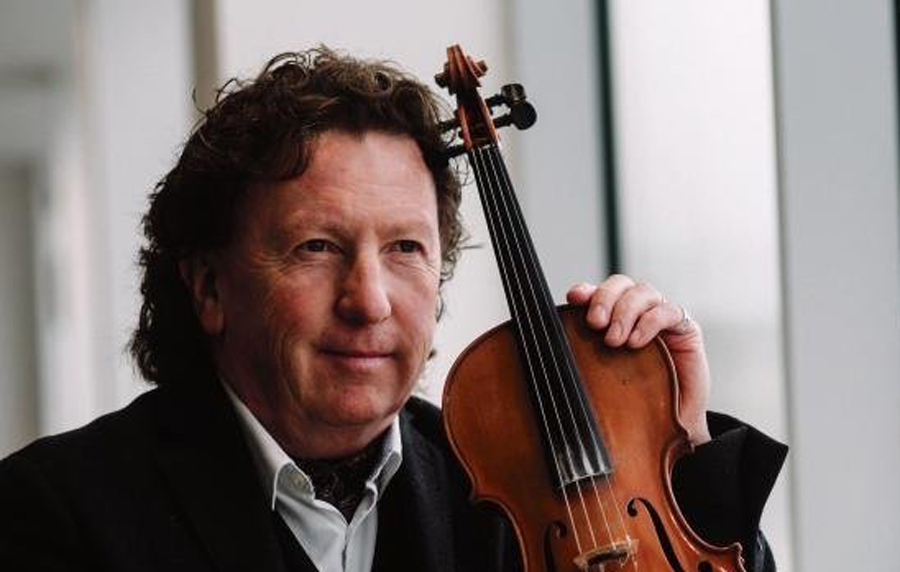 A native of Corrandulla, just north of Galway city, Frankie Gavin has been prominent on the national and international music scene for over forty years, first making headlines as founder member of the acclaimed group Dé Dannan.  His dazzling virtuosity on the fiddle and his championing of the pioneering showmanship in early 20th century recordings of Irish music made in North America have won him many fans within and outside the tradition. Frankie comes from a musical family and started playing when he was given a tin whistle for his fourth birthday. At the age of six he played for President Kennedy when he visited Ireland in 1963. Fifty years later, Kennedy’s daughter Caroline came to Ireland to open the National Library’s exhibition commemorating the four days her father spent in Ireland. Frankie, together with sister Nóirín and brother Seán entertained their American guests again. In the early 1970s Gavin played musical sessions at Galway’s Cellar Bar, with Alec Finn (bouzouki, guitar), Mickey Finn (fiddle), Charlie Piggott (banjo), and Johnnie (Ringo) McDonagh (bodhrán). In 1974, from these and further sessions, he founded the group Dé Dannan with Alec Finn. Although Dé Danann has had many highpoints over a quarter of a century, particularly with the singing of Dolores Keane, Mary Black and Maura O’Connell and the box playing of Mairtin O’Connor, Frankie’s powerful virtuoso fiddle playing has always been at the core of the Dé Dannan sound.

Catherine McHugh is one of the most outstanding young accompanists in Irish traditional music today. Growing up in an area steeped in legends of Irish traditional music, Catherine grew up listening to and playing with many of the outstanding East Galway musicians. Her approach to piano accompaniment, heavily influenced by legends of the piano is far beyond her years with a unique understanding of the music she performs. Catherine is in high demand as an accompanist and has performed at many festivals and concerts nationally and internationally.

Ríoghnach Connolly grew up surrounded by a rich musical familial heritage and through Armagh Pipers’ Club in Armagh City, in the northeast of Ireland. Now based in Manchester, she is a professional vocalist, flautist, lyricist, workshop facilitator and musical activist. She has toured internationally and extensively, performing and recording in bands The Breath (Real World Records), HoneyFeet (Stardust Works) Band of Burns (Órd Bán) and Afro Celt Sound System (ECC). Ríoghnach has a worldwide publishing deal with Real World Records as a writer and currently holds the title of BBC Radio 2’s Folk Singer of the Year. Ríoghnach and Ellis Davies have been playing together for nearly 20 years – as long as long as they have been a couple. Together they have graced stages as far away as Brazil and Singapore, and recorded under Ríoghnach’s name, as festival favourites Honeyfeet and as Beware Soul Brother, along with Mendi Singh. As a duo, they explore the traditional music of Ríoghnach’s upbringing, gently underpinned by Ellis’ fingerpicking guitar style.

“(Connolly is) A remarkable singer and flautist…who can ease from Irish traditional influences to soul.” – The Guardian

This concert features two of Ireland’s most incredible virtuosos and is sure to be a night to tell the grandchildren about in years to come.